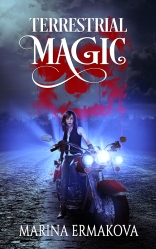 Most sensible people avoid fire-breathing carnivores that prey on humans. But Jordan has built a career out of studying such legendary animals, creatures thought mythological until their reemergence in the world three decades ago. She and researchers like her believe that knowledge is the key to reclaiming the land they’d lost back then, when humanity retreated into designated safety zones.

But when the humans moved out, the legends moved in.

They were the descendants of mythical heroes, inheriting the powers of their ancestors, and they weren’t afraid of the monsters. Jordan never expected to run into a legend, but when a field expedition turns into a trap for her team, she realizes that one deliberately tried to kill her. It’s a diplomatic nightmare the Roman authorities might happily sweep under the rug. But if Jordan doesn’t figure out who attacked her and why, they could try again. Yet even if she does solve the mystery, what could one stubborn scientist possibly do to stop a powerful legend?

Chains Carried on Wings is a YA epic fantasy:

Saig had always lived on the edge of acceptance. Unlike a proper daughter of the head family, she longed for the freedom of the open woods over the confinement of her home. It was enough to drive away the two people who should, by rights, have been her closest companions.

But her perfect, responsible cousin Auris–destined to be the city’s headwoman and resentful of Saig’s inability to conform–would never be her friend again.

And her surly cousin Trei–aware of how his foreign ancestry undermined his own standing in society–would always look at her as a reminder of their shared differences.

Until a series of mysterious disappearances forces all three of the cousins onto the same side. Driven to protect their city and prove themselves, they join the effort to hunt down the perpetrators. What they find is a trap designed to bring their society crashing down, and the power to reshape their city’s future. There’s just one problem–the three of them have always bitterly disagreed on what that future should look like.