Clean Sweep: Dina is an Innkeeper. On the grounds of her inn, she’s incredibly powerful, able to bend reality to her will. But only on the grounds of her inn. It is her job to provide lodging to otherworldly visitors to Earth, protect her guests at all costs, and remain neutral in outside conflicts. But when animals begin dying around her neighborhood, Dina oversteps her bounds to get involved. (Preview.)

Sweep in Peace: Desperate to recover the standing of her inn, Dina accepts a task any Innkeeper with something to lose has already rejected: to host a peace summit between three warring parties, with tensions so high hostilities are bound to break out in the territory she’s meant to protect. Chances of a resolution being reached are virtually impossible, but success would mean an end to the war, lives saved, and the improved wellbeing of her inn. (Preview.)

One Fell Sweep: Dina jumps at a distress call from her sister, not knowing what she’ll find when she gets there. Between helping her sister and a new guest who’s the target of holy war, Dina has her hands full. (Preview.)

Series: So far, two completed books and the third is being posted online as a serial.

The third installment of Ilona Andrews’ Innkeeper Chronicles series is currently running as a web serialization, like the other two before it. And as per usual with the Andrews, it’s a fun, genre-hopping, adventure that refuses to be categorized.

I appreciate how this series deals with a completely new kind of power set and a heroine with an unusual set of goals. Dina’s source of power is her inn. As a result, everything she does revolves around that inn. Her responsibility is to keep her guests safe and their movements secret from the world around them. That’s a different look at these stories than we usually see, where we often follow a mercenary or a cop. Not that there aren’t plenty of good stories about mercenaries or cops, but I like seeing a larger breadth of experiences in protagonists.

There are a number of interesting characters accompanying Dina in her exploits. Caldenia is the inn’s only permanent guest, liable to be assassinated for her crimes if she ever left its protection. Orro is a disgraced master chef, who jumps at the chance to have his abilities recognized again and views short notice on how many he’ll be feeding as an absolute disaster. Evan is Dina’s werewolf neighbor, who goes from cocky and brazen to being more aware of the world, and sometimes a bit lost. George is a manipulative arbitrator in charge of the peace summit, and willing to do anything for success.

It’s fun to see them all come together and interact, their goals and priorities colliding against each other. And yet ultimately, they’re all on the same side.

The world is a mix of urban fantasy and sci-fi, with space-warping inns, vampires, and spaceships. Dina balances the need to stay on her inn grounds to access her power against the necessity of leaving–sometimes going as close as a local department store, other times as far as an off-planet market. And though her job is mainly to stay in one place and protect her inn, she has to understand the spectrum of customs from all of the guests who come to her. This demonstrates a lot of the worldbuilding, and the conflicts between various groups of people beyond the scope of Dina’s town on Earth.

Overall, the series is just plain fun. Another solid, entertaining work from the Andrews. 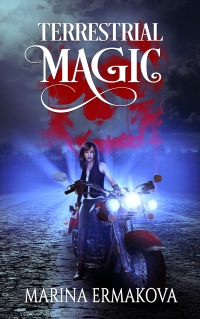